Eurotech unveils Zypad, the wrist-worn pc that will revolutionise the way we use computers 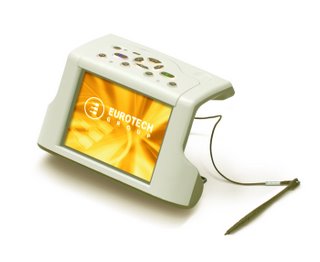 Amaro (Udine) June 28th, 2006 – The Italian stock exchange today saw the unveiling of the Zypad, the wrist-worn computer made by Eurotech, a company dedicated to the research, development, production and marketing of miniature computers (NanoPCs) and high processing capacity (HPC) computers.

Zypad, the result of a high-tech design that combines circuit miniaturisation, a range of hardware functions, optimised power consumption and ergonomic criteria, is a little gem that weighs around 290 grams and promises to revolutionise the way millions of people work. In the long-term, it could become a day-to-day object as common as the mobile phone or the palmtop.

‘The idea behind the wrist-worn computer project,’ explains Eurotech boss Roberto Siagri, ‘was to “leave the user’s hands free”. Zypad will enable users to work with a network connection without being tied to a fixed position. These wearable computers will give us a new freedom of movement, radically changing the way we work, and for the better.’
The primary target is people working in hostile environments, where computers have become essential, but the use of a traditional PC or any other hand-held device is still impossible. Wearable computers are a way of ensuring access to integrated devices without unnecessarily inconveniencing users.
The fact that Zypad is integrated into the users’ personal space and does not monopolise their attention also means that its processing platform and multimedia capabilities can be used without getting in the way of the user’s current activities.

‘In the future,’ concludes Siagri, ‘Eurotech plans to develop wearable computers designed specifically for each of the different target groups in order to best meet their professional requirements. We want to realise the dream that Mark Weiser, pioneer in the field of ‘ubiquitous computing’, summed up when he said ‘The most profound technologies are those that disappear. They weave themselves into the fabric of everyday life until they are indistinguishable from it’.

‘From a technological point of view,’ explains Roberto Turchi, Marketing & Sales Manager at WearablePC, ‘making a wrist-worn computer has involved overcoming a lot of sizeable challenges. Ergonomic studies have demonstrated that weight, wearability and screen size are all important factors in a wearable computer and, in order to meet these requirements, Eurotech has miniaturised the circuits as much as possible to create a computer that is easy to use and comfortable to wear.
The controls are flexible as they depend to a large extent on the user’s requirements and the intended application. Both touch screen and navigation keys can be used, with voice-recognition software currently under development. In all cases, the devices are designed to be as streamlined as possible.
‘We had another big success in power consumption,’ continues Turchi. ‘Thanks to a number of innovative, patented solutions, Eurotech technicians have managed to create a system that allows the wrist-worn computer to run only when it is actually in use, among other things.’

A range of potential users in Italy and abroad are already testing the Zypad.

Eurotech’s new wrist-worn computer could be used in a range of situations where ‘hands-free’ and ‘always-on network connection’ are particularly important, some of which are given below:

Wrist-worn computers could send and receive information to fire fighters and other rescue workers at incident sites. In the near future it will also be possible to receive data transmitted by reconnaissance robots and, using additional sensors, Zypad will also be able to warn users of invisible dangers, such as toxic substances.

Wrist-worn computers will enable medical and paramedical staff to quickly access databases and, in the near future, to read medical data from electronic bracelets worn by patients. Consequently, wrist-worn computers will be particularly useful for preventing errors due to mixing up medical records or misreading a patient’s data. According to some estimates made in the US, the probability of an orthopaedic surgeon operating on the wrong limb in the course of a career could be as high as 25%. For some time now, and in the US in particular, protocols that require medical and paramedical staff to record their actions and the patient’s data on a computer have been undergoing tests.

In warehouses, the time required to select items for packaging and shipment as well as inventory procedures could be considerably reduced thanks to the fact that the Zypad wrist-worn computer can read barcodes and process data on the spot, eliminating the need to transfer data to another computer for processing.

Wrist-worn computers could be used by the police, for example to maintain a constant data exchange between the operations centre, vehicles and officers on the street. Similar uses would be possible in the defence sector.
Power sector

Workers at nuclear power plants currently carry devices that check for excessive levels of radioactivity. Such devices can only be read by the individual user, but a wrist-worn computer could send information on all workers to a control centre in real time, ensuring a quick response in the event of an accident.

The procedures for selling airline tickets and boarding planes, which require a fixed terminal, could be revolutionised with the use of wrist-worn computers, making its possible for employees to circulate among passengers to perform the necessary checks, thus removing the need for a fixed terminal.

Climaveneta for the new Prysmian Group HQ, under LEED Platinum certification. The Bicocca district in Milan is home of urban landmarks with hundreds of years of history, which today helps to determine the identity of the refurbished district, changing the use and perception of it for the better. An example of a successful refurbishment project in the district is the headquarters of Prysmian Group , a world leader in the energy and telecom cables and systems industry. The building, designed using the very latest technologies in architectural innovation and paying great attention to energy efficiency and sustainability, will provide a 22,000 m² space and will be able to accommodate 700 people. The new Prysmian Group headquarters, which is pursuing LEED Platinum , will be built in the Bicocca district and even its shape, similar to a typical Lombard factory, will recall the industrial roots of this area. The complex will consist of four wings, used for offices and services, connected b