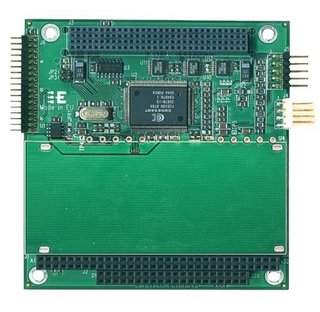 
Amaro (UD) Italy - 15th November 2006. The new Eurotech INT-1462 provides a seamless interface for video signal streaming of up to 4 channels over the PCI bus. Systems based on Eurotech embedded high reliability PC/104Plus CPU modules are able to take full advantage of the performance and capabilities of the INT-1462.

Designed for demanding applications, this new module supports a variety of features such as video capture with overlay, scaling, cropping and clipping support. Video data can be stored into the host memory or into the frame buffer of a display interface at 30 fps (NTSC) or 25 fps (PAL) at full resolutions or subsampled at a lower rate. Embedded multimedia applications greatly benefit from the versatility of this module.

The integrated Conexant Fusion 878A video chipset is widely supported and therefore software and embedded operating system compatibility is guaranteed.

Eurotech can offer standard rugged computers that integrate the INT-1462 module for a variety of rugged digital video processing applications in mobile installations.

ABOUT THE EUROTECH GROUP:
The Eurotech Group (www.eurotech.com) is today a leading international group of companies strongly focused on the design and development of high-performance and high-availability NanoPCs and HPCs. Eurotech's mission is to create intelligent electronic devices suitable for transportation, defence, medical and industrial sectors.