Gilbert & George to be awarded at the Florence Biennale 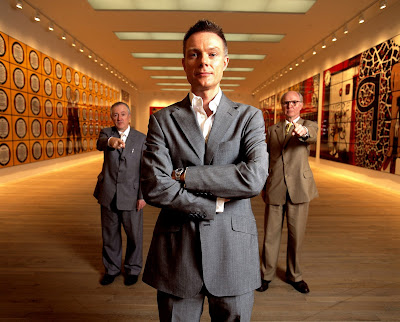 Florence, Italy - The sixth edition of the Florence Biennale of Contemporary Art will take place at the historic Fortezza da Basso from 1st - 9th December, 2007. This year’s edition will include, as honoured guests, the acclaimed artists Gilbert & George and from the White Cube Gallery London, Tim Marlow. Gilbert & George will be awarded the Lorenzo il Magnifico prize on 4th December.

On the successful wave of their exhibition at the Tate Gallery in London, Gilbert & George will come to Florence together with Tim Marlow, exhibitions director of the White Cube Gallery London, protagonist of the famous BBC programs dedicated to the art world, Rolf on art, founder of the Tate Magazine, and now collaborator on Channel Five, where he presents a program on current exhibitions. Tim Marlow has published several books and important artists monographs such as Auguste Rodin and Egon Schiele. He writes for various magazines and newspapers such as The Times, The Guardian, The Independent on Sunday, Art Monthly, etc.

Since 2001, the Biennale, collaborates with the United Nations, as an official participant of the Dialogue Among Nations program. Former Secretary General Kofi Annan wrote in support of the program:

I believe that dialogue is an opportunity for people who come from diverse cultures and traditions to know each other better whether they live on opposite sides of the world or on the same street.

Political ambassador and Artistic Director of the Parliament Museum in San Paolo, Brazil Emmanuel von Lauenstein Massarani is the 2007 Biennale Director. Massarani has replaced John T. Spike in the role, who determined the fundamental philosophy of the Biennale, and in turn, its success.

In Carter Ratcliff’s “Gilbert & George: The Complete Pictures 1971-1985”, (London, 1986) Gilbert & George stated “We want Our Art to speak across the barriers of knowledge directly to People about their life and not about their knowledge of art... The content of mankind is our subject and our inspiration. We stand each day for good traditions and necessary changes. We want to find and accept all the good and bad in ourselves”.

Gilbert & George met at St Martin’s School of Art, London in 1967 and have been one artist ever since exhibiting for the first time together in 1969 at the Nigel Greenwood Gallery London, with “Singing Sculpture”. They referred to themselves not as performance artists but as “Living Sculptures” and their “responsibility suits”, the almost, ill-fitting sixties style suits which have become emblematic of part of their image, were part of the “living sculpture” that they embodied.

In the 1970’s Gilbert & George turned towards creating their own black and white photographic images. They almost always depicted themselves in a grid format along with aspects of the east end of London where they live: faces, buildings and graffiti, “Smash the Reds”, 1977 or “Bummed”, 1977 where there is also a political aspect and the important introduction of the colour red. In “Prick Ass”, 1977 film clips of a homeless alcoholic are inserted into the multi part image: this interrelationship with people and architecture stress the images of anger, loneliness and destruction and are further highlighted by this use of red.

In the 1980’s where their subject matter expanded to include sex, religion, nature, fear, racial differences and politics, their sumptuous works became brightly multi-coloured. They once stated “when we are working we have our brain, our soul and our sex. These are the things that we work with. Sometimes we do a picture more for sex, sometimes more for our brain and sometimes more for our spirit. It’s always with a combination of those three that we work. The whole of civilisation continues because of those driving forces”. (Ratcliff, “Gilbert and George: The Complete Pictures 1971-1985”, London, 1986). Indeed, these photographic works continue to be placed within a framed grid, which lends to convey the image more forcefully to the viewer. The idea of natural division in the world is important to the artists who, when talking about the grid aspect of their works, have given the examples of house being made up of bricks or a week of days.

Gilbert & George represented Great Britain at the Biennale di Venezia in 2005 with a new group of paintings, “Thirteen Hooligan Pictures” (2004) and Perversive Pictures (2004). Indeed “Six Bomb Pictures: Terror” their most recent work from 2006 continues to affront current affairs and political issues.
Such is Gilbert & George’s commitment to their art that they have continued to adopt this persona of living art in their everyday lives: in their normal but formal way of dressing, their name and address being in the phone book, they are thought to have been seen on the London bus, in their measured formality, aspects that in today’s celebrities you rarely see.