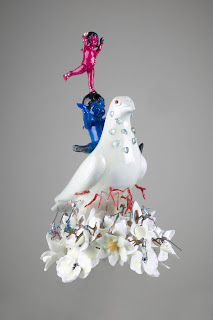 In May and June 2008, Jackie Sleper's artworks will be exhibited in the Museo de la Isla in Cozumel in a show curated by Matty Roca.

From 9 May - 20 June 2008, the Museo de la Isla in Cozumel will host Dulce y Amargo, the exhibition of Jackie Sleper's artworks inspired by, and dedicated to, Mexico and to Frida Kahlo, curated by Matty Roca.

Cozumel is the second Mexican location for the Dulce y Amargo exhibition which forms part of the series of exhibitions that the famous Dutch artist will be showing in Mexico in 2008 and 2009, all being curated by Ma tty Roca, art historian, museum curator, and art critic. The first exhibition of Jackie Sleper's works which was held at Chetumal was considered a great success. David Domínguez Povedano, General Director of the Museo de la Isla in Cozumel has announced that there is great interest in seeing the forthcoming event.

Jackie Sleper, the winner of the section "Sculpture and Installation" at the Florence Biennale 2007 has always been fascinated by Mexico and the artist Frida Kahlo, for whom she has a profound admiration. In 2005, she received an invitation from Matty Roca, art historian and art critic to depict her vision of Mexico. Over the course of two years Jackie Sleper, together with her husband and children, spent many months in the country. Jackie says: "Matty became a dear friend. She showed me Mexico. I took in everything around me, spoke with lots of people and, especially, got a sense of the country. My previous love of Mexico only grew stronger. Over the next two years my work will be travelling to various museums in Mexico – something I would never have dared dream of as a child. I feel like I am on top of the world. This is the link that completes the chain."

Her modern works are at times reminiscent of Rivera, Orozco, Tamayo and Pollock. Jackie Sleper assumes absolute freedom in applying various techniques and introducing experimental elements: her work is characterised by combinations of photography and painting, and the use of mixed media. In addition to paintings, Jackie creates objects that incorporate a variety of multiple materials, which she transforms into wholly new and surprising concepts. The artist allows her work to be guided by a profound sense of humanism, and she's depicted as an artist in the truest sense of the word: her work has always been grounded in her exploration of human existence and the significance behind it.

Matty Roca: "I have been able to witness Jackie Sleper's development – as a photographer, painter and sculptor – at first hand. Every painting is an intensely personal creation and expression, presenting the world as she perceives it. She is sensitive, intense, mysterious and subtle, but also possesses a cast-iron personali ty. Above all, she knows exactly what she wants. She conveys her personality with exceptional clarity, so that she is comprehensible for one and all."

Jackie Sleper was born in Amsterdam and studied at the Utrecht Academy for Visual Arts. Between 1988 and 1995 she spent time in Ireland, Spain and Prague for study purposes. Works produced in her home country, the Netherlands, include a tile plateau in honour of Wilhelm Conrad Röntgen, commissioned by the municipality of Utrecht, and 'light objects' for the Kruisheren Hotel, a design establishment that opened in Maastricht in 2005. Outside the Netherlands, she has exhibited in Antwerp (Art-Event), Stockholm (Art Fair), Marbella (Marb Art – Feria Internacional de Arte Contemporáneo), Geneva (Europ'Art), Klagenfurt (Biennale Austria), Salzburg (Mozart Festival), Florence (Museo Diocesano and Biennale Internazionale dell'Arte Contemporanea), Milan (Studio D'Ars), New York (Carrozzini Von Buhler Gallery and CVB Space), and in M exico. One of her works, Modestia, was exhibited during La Biennale di Venezia, at Open 2007. She won the 1st prize for "Sculpture and Installation" at the Florence Biennale 2007.

CALENDAR MEXICO 2008 (dates to be confirmed):

Images:
You can also see images of Jackie's artworks at
http://www.flickr.com/photos/dulceyamargo

It will be possible to follow the various stages of "Dulce y amargo" thanks to the information and images that will be posted on www.dulceyamargo.com.
Visitors to Jackie's exhibitions in Mexico, can also upload photos taken during the exhibition s on flicker and share them with
http://www.flickr.com/groups/dulceyamargo
At the end of the exhibition series, the authors of the three photos that Jackie likes most, will each receive a signed lithograph of one of her works.