Le Basour as opening band for P.O.D. (Payable on Death) 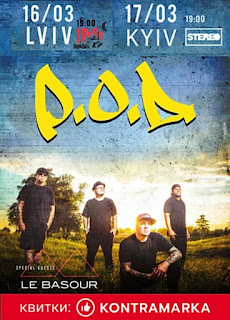 The Italian rock band Le Basour has been officialized as the Main Support of the Californian band P.O.D. (Payable on Death) for their Ukrainian Tour.
It is not the first time for Le Basour making the so-called "Warm up" to international bands, just to quote some of their shows with Three Days Grace, Thousand Foot Krutch, The Birthday Massacre, Royal Republic.
Allen, the frontman shared this comment with us: "This success is dedicated to all the dreamers, visionaries to all that people who never give up”.
Founded in Treviso in 2014 by Allen (vocals, guitar), Skylle (bass) and later joined the band Knk (guitar) and Giorgio Murer (drums). in the early 2015 the band published their first album "Pray to Stay" following the single "Jump" just 6 months ago.
Their video “Jump” already reached more than 200,000 views and the song has been broadcasted in rotation on MTV USA and in many other European and American radio stations.
Can this be a preview of a new album? We can just wait and see…
LE BASOUR
lebasour.com
facebook.com/lebasour
youtube.com/lebasour
mad4music.org
Le Basour musica press release